Increasingly publicized by fundraising that has reached dizzying heights, startups that engage in industrial insect farming are on a roll.

But why such a craze? The increase in the world's population and the resulting demand for protein is pushing manufacturers to find more sustainable alternatives with a low environmental impact.

On this point, the development of industrial farming of edible insects could change the situation in terms of human and animal nutrition at the global level.

Although regulatory constraints remain in Europe, the potential of the sector in terms of sustainable development and ecology feeds the hopes of a growing number of players in the agricultural and industrial world.

Overview of this new production that could revolutionize our perceptions and consumption patterns.

Discover how insect farming, still emerging in our western countries, can contribute to the conservation of our resources.

1) Industrial insect farming: an alternative and sustainable source of protein

According to UN projections, the world's population is expected to increase by 2 billion over the next 30 years (from 7.7 billion today to 9.7 billion in 2050). In fact, this strong demographic growth will lead to a significant change in our consumption and eating habits over the next few decades.

The evolution of production methods in agriculture is at the heart of this issue: the FAO estimates that world food production will have to increase by 70% and meat production (pork, beef, poultry) will have to double to feed the world's inhabitants. This demographic challenge poses a number of questions, in particular the increase in animal protein requirements.

The interest of insect proteins 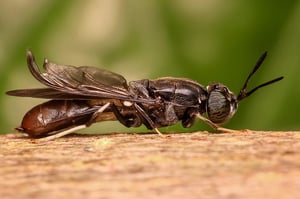 The increasing pressure on natural resources caused by our production and breeding methods is pushing researchers and economic actors to consider alternative sources of sustainable protein supply for human and animal food.

This urgency has led for several years to the recognition of the interest of insect proteins, in particular the black soldier fly (hermetia illucens) and the miller beetle (Tenebrio molitor).

2) Will dried mealworms soon be part of our food? 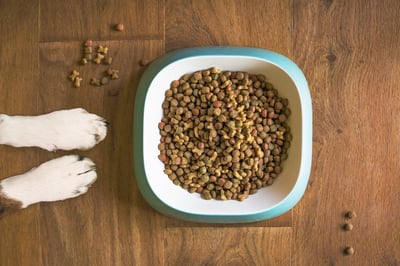 As with any technological development, a certain number of regulatory constraints are imposed by the authorities in order to guarantee the food and health safety of a relatively new production method.

Since July 2017, the European Union has allowed the inclusion of insect proteins in the feed of farmed fish (aquaculture) and domestic animals.

The farming, processing and sale of edible insects are subject to rules introduced for "novel foods".

This "novel food" (food that has no history of consumption in the European Union before May 15, 1997) must adapt to the common ones of animal husbandry.

The miller beetle, an insect that is safe to eat

In January 2021, a new step was taken following the opinion of EFSA (European Food Safety Authority), which gave the green light to the consumption of food derived from a species of beetle, the miller beetle..

This same authority concluded that the larvae of this "mealworm", could be safely consumed "either as a whole dried insect or as a powder" (insect meal).

On the basis of this opinion, the European Commission will submit a draft proposal to the Member States in the course of 2021 to authorize the placing on the market of dried mealworms and derived products, and to specify the conditions for their marketing. 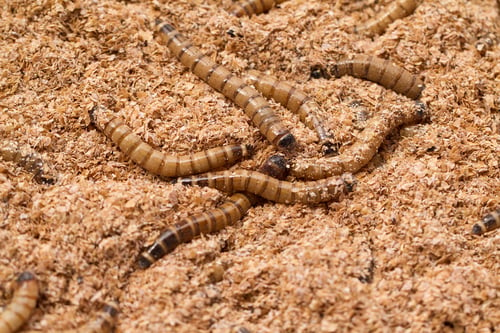 Discover how our software will increase your production

Today, the insect protein market is largely dominated by Asia, whose players benefit from a less strict regulatory environment. In the near future, aquaculture is expected to hold a considerable share of the global insect food market.

Livestock and fish are important sources of protein in most countries. Fish production and consumption have increased dramatically in recent decades.

As a result, the aquaculture sector has boomed and now accounts for nearly 50% of global fish production, which is expected to drive demand for insect meals and oils in this segment.

In addition, the increasing demand for farmed fish worldwide has resulted in higher prices for fish meal and fish oil. This should increase the demand for viable protein-rich feed alternatives for aquaculture.

Finally, the growing popularity of pork and poultry among the population (especially in China) should lead to an increase in production and have a positive effect on the sale of insect-based foods (meals, oils).

Europe and the United States: a favorable environment for the development of insect farming firms

In Europe and the United States, the market is only emerging and the volume of current production cannot compete with conventional food sources. But the growth potential is there (12% per year according to a recent study by the consulting agency Mordor Intelligence).

The growing interest of investors (several important fund raising in this sector in the last few years) and the arrival and rise of many French and European players, testify the potential of the entomoculture market.

In addition, the increase in global demand for premium foods (multiple protein sources, specific contributions of essential fatty acids and fiber), which cannot be met by conventional sources of protein, particularly in aquaculture (in a context of declining fisheries resources) and for pet food.

What are the objectives of the stakeholders of the insect industry? 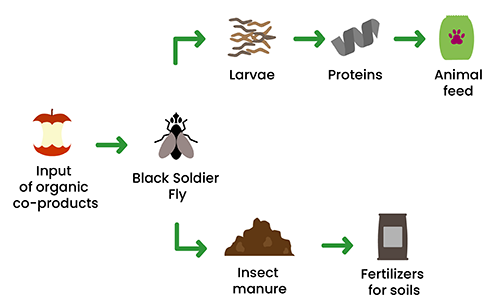 These new players are looking to the future by committing to a circular economy approach. Their ambition is to develop a complete biological value chain through the exploitation of the physiological capacities of insects.

To achieve this, they convert plant by-products into biomass, which will be sustainably transformed into proteins and lipids for fish and pet food. The organic matter recovered through this process will serve as a supplement for soil fertilization.

4) Processing insects at an industrial scale

Beyond the regulatory constraints and the reduction of the environmental footprint of farming, the industrialization of insect production is a major challenge for the sector's players.

In France and in the world, the black soldier fly (hermetia illucens) and the mealworm (tenebrio molitor) are the most used insects in insect farms and factories.

A growing number of economic players, large groups and startups, are interested in this booming market. Their ambition is to develop the breeding and processing of insects on an industrial scale, from the supply of raw materials to final processing.

If this virtuous production process appears simplified compared to other industrial breeding techniques (use of bio-waste and co-products from the food industry, reduced surface area, rapid growth), there are still uncertain areas before reaching a satisfactory level of industrial efficiency.

The process of industrialization of the production of insect farms is extremely important to allow the sector to gain in productivity and efficiency. It is a question of technical and economic viability.

Reducing environmental impact, controlling health risks and improving energy performance are among the challenges to be met in the coming years.

Producing insects at an industrial level requires attention to various points in the production chain. Automating actions allows to gain in efficiency and productivity. One of the answers to this need for automation and ultra-precise monitoring is the use of new technologies such as artificial intelligence and vision-based control.

AI and computer vision are sustainable solutions that enable to:

The startup Dilepix is one of the few companies to develop its own neural networks and is the only one to offer solutions to insect producers.

More robust and perfectly adapted to the difficult conditions of farms and factories, the Dilepix algorithms, combined with the computer vision, bring a remarkable precision: 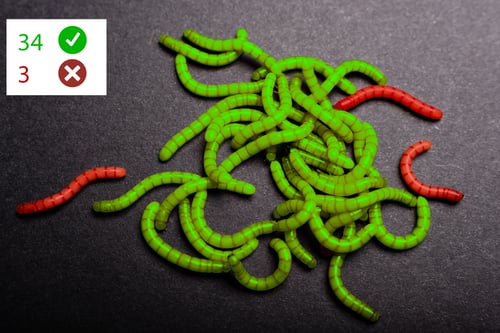 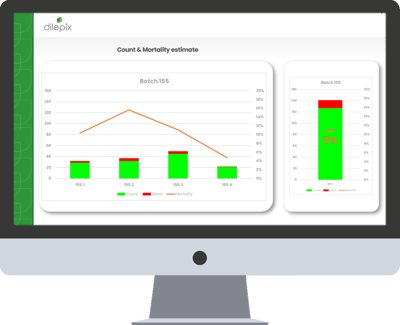 These technologies are recognized for their robustness (they have been developed over the past 15 years in partnership with major industrial groups and validated under real conditions) and are adapted to the constraints of agricultural buildings and plants.

Industrial insect farming and the use of its production, in a circular economy approach, could constitute a real disruptive innovation in the coming years. The use of natural resources and the development of a more sustainable agricultural model, taking into account the needs of all stakeholders in the sector and the future of the planet.
Dilepix is determined to be an active participant.

Since its creation in 2018, innovation and sustainable development in the agricultural and industrial world have been at the heart of the French agtech startup's DNA.

Discover how our software will increase your production

Expertise
Dilepix
Legal Notice
Dilepix and its logo are trademarks of Dilepix SA. All copyrights reserved © 2018 - 2020